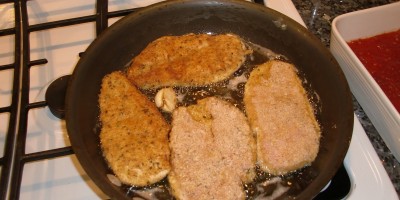 Chicken parmigiana (also referred to colloquially in the United States as ‘chicken parm’ and in Southern Australia as a parmi or parma is a chicken dish based on the Italian Parmigiana. It consists of a breaded chicken breast, or chicken schnitzel, covered with a tomato-based neapolitan sauce and cheese.

In the United States and Canada, chicken parmigiana is often served as an entree, and sometimes with a side of or on top of pasta. Many restaurants also offer chicken Parm sandwiches, putting chicken parmigiana between two slices of bread.

In Argentina, there is a variation of milanesa a la napolitana which is made with chicken instead of the usual beefsteak and is a variation of chicken parmagiana. It is sometimes topped with ham, bacon, or a fried egg and is usually served with french fries.

Parmo is a breaded cutlet dish originating in Middlesbrough, England. It typically consists of deep-fried chicken in bread crumbs topped with a white béchamel sauce and cheese. The Parmo originated as escalope Parmesan, a derivative of veal or chicken parmigiana. The parmo is said to have been created by Nicos Harris, a chef with the United States Army in World War II. He was wounded in France, but was brought to the United Kingdom to be treated in a British hospital. Eventually, he moved to Middlesbrough and opened a restaurant on Linthorpe Road, where he created the parmo at The American Grill in 1958.